Hello Everyone! Happy Friday– and what a beautiful day it is here in sunny San Diego.  We haven’t celebrated Flip Flop Friday for a while so I figured it was time to get back on track with that–haha.  And what better way than to talk about how to keep your flip-flops clean. 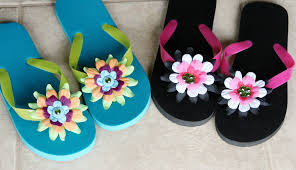 Flip flops are my favorite “shoes” of summer. They are great for wearing to the pool,  the beach and just hanging out.  Now that the Fall season is upon us, have you noticed your favorite pair is getting a  little dingy? Here is how to bring them back to life and better than ever!

Happy Flip-Flop Friday everyone! Flip flops are a $2 Billion per year industry in the United States. You’d be hard pressed to walk down any street in America and not see at least one person sporting a pair of flip-flops.

Flip flops have been around for at least six thousand years. As a point of comparison, primitive shoes are shown in rock paintings dating from the late Paleolithic (Stone Age) period some 15,000 years ago. There are depictions of flip-flops in ancient Egyptian murals on tombs and temples from about 4,000 B.C. Styles too varied with the differing placement of the toe strap, as subsequent civilizations preferred using different toes. The Greeks for example made use of the big toe; the Romans, the second toe; and the Mesopotamians, the third toe.

Flip flops are a type of open-toed footwear typically worn in casual situations, such as outside or at the beach. They consist of a flat sole held loosely on the foot by a Y-shaped strap that passes between the first and second toes and around either side of the foot.  Thong sandals have been worn for thousands of years, dating back to pictures of them in Egyptian murals from 4,000 B.C. These early versions of flip-flops were made from a wide variety of materials including rawhide, wood, papyrus and palm leaves to name a few.  The modern flip-flop became popular in the United States as soldiers returning from World War II brought Japanese zōri with them. They quickly became popular because of convenience and comfort, and were popular in beach-themed stores and as summer shoes. During the 1960s, flip-flops became associated with the beachy lifestyle of California. They were promoted as an accessory, typically worn with shorts or swimwear. Beginning in 1962, the Brazilian company, Alpargatas, marketed a version of flip-flops known as Havaianas. These quickly become some of the most popular in the world: By 2010, more than 150 million pairs were produced every year.

Personally, I love my Havaianas!  They are the perfect “shoe” to throw on when I run down to get the mail or pop out the door for errands on a busy weekend.

Wedding flip-flops? It never occurred to me these words could fit together in a sentence.  Maybe I’ve been wrong all this time….  read on….

Tonite I googled “flip-flops” to see what came up- you know, to inspire me to find something slightly interesting to write about for Flip Flop Friday. Then I saw the wedding flip-flops thing and just had to check it out. Really… flip-flops on your wedding day? Well, why not??!   (I found some really cute choice!)

Some great websites to check out:  Etsy, wrapwithus.com; Bridalflipflops.com; Nordstrom; Macy’s… I could go on….

Happy Flip Flop Friday! It looks like my favorite budget friendly store Old Navy has joined forces withTerracycle to help us all recycle our old flip flops. What a great idea.

Every time you send your old flip-flops to TerraCycle, you’ve done a green deed for Mother Nature by diverting waste from our landfills. To show our gratitude, for every shipment of about 25 pairs of flip-flops, or 50 individual flip-flops (about 18 pounds), you will receive exclusive coupons from Old Navy to distribute to the participants who helped you collect.

It’s totally free to participate in a TerraCycle Brigade. There are no signup or participation fees, and the shipping is covered by the program. Once you’ve joined the Flip-Flop Brigade, follow the steps below to earn your Old Navy coupons:

It will take approximately 7 to 10 business days from the date your shipment is received for TerraCycle to process your package. Once processing is complete, you will receive your Old Navy coupons through  postal mail.

Download our helpful TerraCycle “Collect, Store and Ship Guide” for tips and tricks that will make the collection process simple and mess-free. Also check out our Flip-Flop Brigade Poster and Flip-Flop Brigade Thermometer Poster to help promote your efforts and keep track of your collections.

And… by practicing good recycling karma we can all buy more fun flip flops! You can get them at Old Navy for something like 2 pair/$5.

It’s Friday!! I had a big afternoon at the pool. Wearing flip flops of course. Cheers and have a good weekend!

Happy Friday everyone! Check out these pretty flip-flops I found at DSW this afternoon. Perfect to wear with some cute denim shorties. Cheers!

How can you go wrong with a fun pair of flip-flops on a Friday? Or any other day for that matter? Too bad they aren’t legal at the office!  I went on a little stroll thru the mall tonite in search of… you guessed it… flip-flops.  I love flip-flops which means there might be another Flip-Flop Friday in my future. Cheers and happy Friday everyone!

My first stop was Nordstrom to “visit” my friends the fabulous Tory Burch flip-flops pictured below in some festive colors. These babies ring up at an impressive $50– which is why I only “visit” them and have not officially busted out my credit card.

Moving on thru the mall and on to Macy’s, I found these beachy white flip-flops from Michael Kors.They come in a variety of color choices including white, orange and hot pink. A bit more economical, they ring up at $29.  We’re getting closer to my price range….

The last stop in my flip-flop Friday shopping adventure was Cathy Jean. I found these cuties for $22.50. Not bad. I really liked the animal print version pictured below. They also come in several other shades.

I’ll have to keep shopping– I’m determined to come in under $10…. wish me luck.